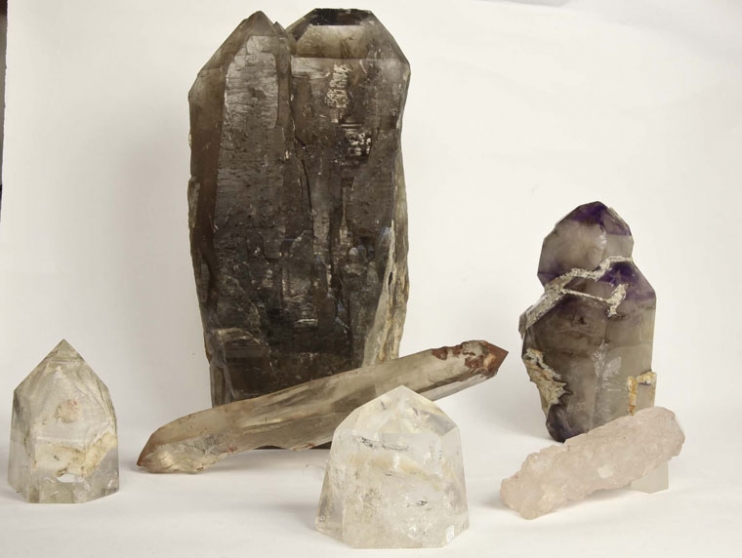 Customers frequently ask me which crystal or mineral I like best and most of the time I struggle to give them a short answer. Like our friends, we have a greater connection with, or need for, some crystals more than others at certain times in our lives. Unwilling to abandon past favourites for newly discovered crystal companions my list seems to get longer and longer!

It always begins with some form of quartz though - whenever we go on a buying trip I swear I won't buy quartz because we don't need any and every time I come back with more quartz! I love strange and unusual quartz, particularly ice crystals, fadens and elestials, and my favourite quartz comes from the Himalayas (like the amazing Tibetan DT in the picture above). I'm not drawn to Arkansas quartz, I'm quite fond of Brazilian quartz and I really like Madagascan quartz which has a more female energy. When I set up debris, in a small shop in Barry 23 years ago, I wasn't familiar enough with crystals to know what came from where but I soon learned that Arkansas quartz gave me such a headache that I had to shut it away in a cupboard until I had properly cleansed it. Then I discovered that most of it was acid bathed for up to six months to clean the residue of other minerals off the surface of the quartz and to make it brighter - no wonder I had a headache! I didn't buy smokey quartz for the first year either, it made me feel horribly sick. Then I found out that the dark material I had first encountered had been artificially irradiated and that I was absolutely fine around smokey quartz that nature herself had coloured with radiation. What a breakthrough - I think that is when my addiction to smokey elestials began! Actually, I must admit that it has been quite useful over the past 23 years to feel queasy every time someone offered me smokey quartz that was not as nature intended!

I have been something of a disciple for smokey elestials over the years and a number of our lovely regular customers and friends seem to have succumbed to the same weakness as me! There is something about a smokey elestial that makes you feel as if there is always someone on your side, rooting for you and supporting you - like a best friend. The smokey element dispels negativity and dissolves emotional blockages at a steady, sustained pace while it throws a cloak of protection around you and the elestial formation synchronises your heart and intellect. As Melody so aptly puts it: "Elestials help one to look within and to find the love that has always been there."

Some years ago in Tucson, Arizona, Simon and I bought a magnificent, large, twin point smokey quartz which we call the Guardian (pictured above). It has been watching over the shop, and us, ever since and we would never part with it. We also have an amazing large smokey quartz Himalayan cluster - I tried hard not to buy that because it cost an arm and a leg but it decided it was coming with us and there was no getting away from it! Among my other 'favourites' are aquamarine and topaz crystals, kunzite, morganite, heliodore, weird shaped Tibetan tektites and Herkimer diamonds as well as natural quartz, labradorite, grey moonstone and iolite in jewellery. I have come to realise that, generally speaking, I seem to be attracted to crystals associated with the crown, third eye, throat and heart chakras and have a positive aversion to many, though not all, of the stones linked to the root, sacral and solar plexus. I'm sure that means I need grounding and I'm resisting at all costs!