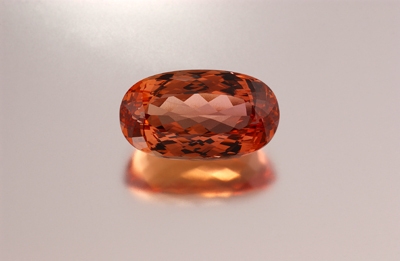 AUGUST BIRTHSTONE
The two birthstones for August are Peridot and Sardonyx.

Peridot is a gem-quality transparent variety of olivine, a mineral composed of magnesium-iron silicates. The colour of olivine ranges from olive to lime green, sometimes with a brownish tinge. The green colour is due to the presence of iron, while the brownish tinge indicates a higher iron content. Since ancient times peridot has been regarded as the symbol of the sun. The Greeks believed that it brought royal dignity upon its wearer. During the Middle Ages, peridot was pierced, strung on the hair of an ass and attached to the left arm to ward off evil spirits. The Crusaders thought that peridots were emeralds and brought them back to Europe where they were featured as ornaments in churches. In Hawaii, peridot symbolizes the tears of Pele, the goddess of fire and volcanoes, because it is a gemstone that forms deep inside the earth and is brought to the surface by volcanic eruptions.
Peridot is said to host magical powers and healing properties, protecting against nightmares and bringing the wearer power, influence, and a wonderful year. Today peridot is predominantly sourced from Arizona, China, Myanmar, and Pakistan.

Peridot is associated with the heart and solar plexus chakras and helps to harmonise and activate them, integrating love and will. In crystal healing layouts it is a great stone for releasing pent up emotional pain or regret. As Robert Simmons so beautifully puts it: "These stones are little green nuggets of positive power. Their vibration brings an inner sense of warmth and well-being, like sunshine on a spring day."

Sardonyx is a variety of the silica mineral chalcedony. This kind of mineral contains translucent or opaque layers of tiny quartz fibres which form layers and produce a banded appearance. Sardonyx stones usually contain white and brownish-red bands. The word sardonyx is derived from the Greek, sard meaning “reddish brown,” and onyx meaning “veined gem.”
The stone was popular with the ancient Greeks and Romans who carried into battle talismans of sardonyx engraved with images of heroes like Mars, god of war, or Hercules. They believed these would bring courage and victory and ward off evil. During the Renaissance, sardonyx was believed to bring eloquence to the wearer and was highly valued by public speakers and orators.
Because of its attractive banding, sardonyx has long been used to fashion cameos (carved raised figures) and intaglios (the reverse of cameos). A relatively common and inexpensive gemstone, it was a favourite in ancient times. It was popular not only because it was attractive but also because it was widely available and, unlike precious stones like ruby or emerald, it was affordable for those who were not part of the wealthy elite.
The most attractive sardonyx specimens are found in India, but it is also mined in Czechoslovakia, Brazil, Uruguay, Germany and the USA.