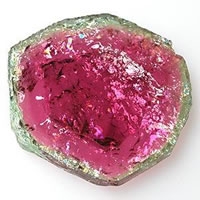 OCTOBER BIRTHSTONES
There are two birthstones for October – Tourmaline and Opal.

Tourmaline is a crystal boron silicate mineral compounded with elements like aluminium, iron, magnesium, sodium, lithium, or potassium. The name is thought to come from the Singhalese, Sri Lankan, word ‘turamali’, a word used there for yellow, green or brown stones. It means something little out of the earth.
Tourmaline is a semi-precious stone which comes in a wide range of colours, from yellow, green, red, blue, pink, violet, brown and black to mixed bands of colour. One of the most sought after tourmalines is a bi-colour stone with a green outer edge and pink centre and is popularly known as watermelon tourmaline.
It is the metals present that give the crystal its colour. A pink colour, for example, is caused by manganese while greens indicate that ferrous iron, chromium or vanadium are involved. Gem-quality tourmalines have been mistaken for rubies, emeralds and sapphires. One famous tourmaline the size of a pigeon’s egg, which belonged to Russian Empress Catherine the Great, was long thought to be a ruby.
Tourmaline has a hidden talent. When you warm or rub it, the stone becomes charged with static electricity and will attract dust particles or bits of paper.
Nowadays, tourmaline is very popular with jewellers and crystal healers for both its beauty and its healing properties. In general, Melody says tourmaline acts to clear, maintain and stimulate the body’s chakras (energy centres). She says it can attract inspiration, diminish fear and encourage self-confidence. It is also helpful for balancing male/female energies, the mind, the chakras and the auric body. The different colours have additional properties. Black tourmaline, for example, is used to repel and protect against negativity while pink tourmaline touches the heart, promoting love and emotional healing.

The name opal comes from the Sanskrit word ‘upala’ and the Latin ‘opalus’ meaning precious stone.
Opal is a soft stone, a hydrated silica material, which reacts to heat and pressure changes. Heat will make it go cloudy and if the stone dries out it will crack. The colours in opals are governed by the presence of impurities and it is the play of light on small cracks within the stone that causes the colours to flash when the stone is moved around. The sought after ‘black’ opals, predominantly from Lightening Ridge, Australia, which flash blue, red and green derive their colour from magnesium oxides and organic carbon while yellow and red opals indicate that iron oxide is present in the stone.
To most cultures opal has, since ancient times, been seen as a symbol of hope. In ancient Rome it symbolised love and hope while the Orientals referred to it as the anchor of hope. In Arabia opal was thought to have fallen from the heavens in flashes of lightning.
During the Medieval period opal was an indicator of good health or illness, the colour intensity fading if you were sick. It was supposed to protect you from infection, prevent fainting, and maintain a strong heart. It was a favourite talisman of thieves since it was supposed to make you invisible if you wore it!
All this positivity about opals took a turn for the worse when the Black Death killed thousands as it swept through 14th century Europe. Some believed that opal was responsible because when plague victims wearing these gems died, the stones would lose their brilliance and become dull and clouded. It was plague’s rapid transition from the heat of a raging fever to the icy coldness of the arrival of the grim reaper that was really to blame for this stone changing its appearance, That is how sensitive opal is to changes in temperature.
Today, opal is once again a very popular stone in jewellery. The various types of opal, from Andean blue and pink, to orange ‘fire’ and clear Oregon opal, differ widely in value and in the healing properties attributed to them.