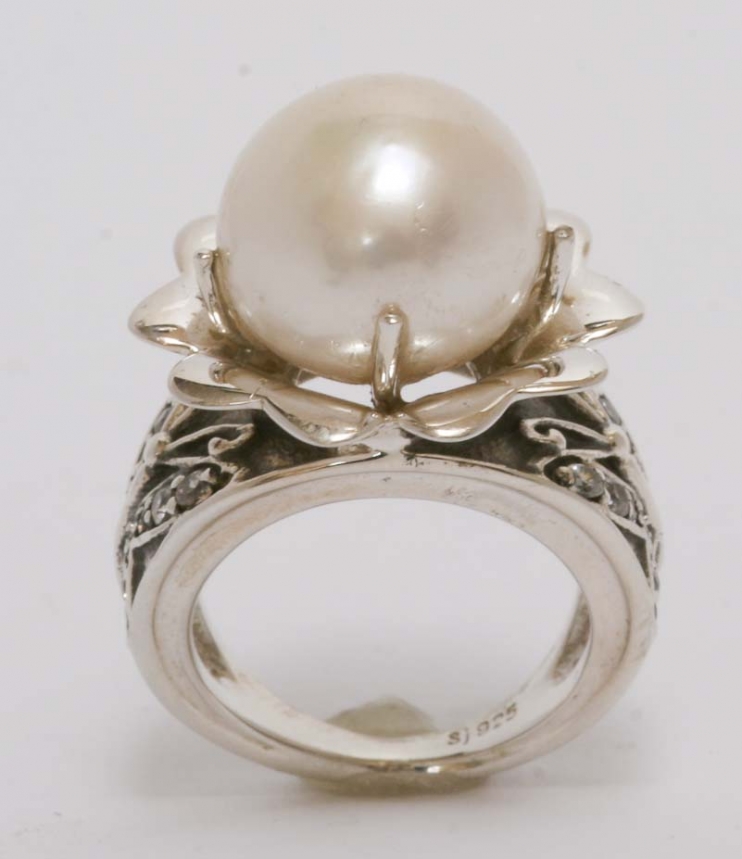 JUNE BIRTHSTONES
There are three birthstones for June - pearl, moonstone and alexandrite.

PEARL
The popularity of pearls has peaked many times over the centuries and this decade is no exception. One of the coveted jewellery materials of the Roman Empire and a favourite of Elizabeth 1 in the 1500s, pearls have always been generally liked but in the last few years have enjoyed a resurgence in the fashion stakes. A few decades ago they might have been seen as something your granny wore but now they are more likely to be on the catwalk or decorating the ears, arms, fingers and necks of celebs.
They are also more affordable than they were in past centuries. In the early 1900s the first successful ‘farming’ of cultured round saltwater pearls began and since the 1920s cultured pearls have captured the market. Pearls are the only ‘gems’ that have an organic origin, rather than being found in the earth. They are formed when a small irritant aggravates an oyster so much that it coats the foreign body in layer after layer of nacre. The pearls that form within the tissue of the mollusc are either round or pear shaped while the ones formed on the inside of the shell are irregular. Both sea and river oysters produce pearls and they come in a variety of colours, from white, cream, grey and black to pink, yellow or blue. Nowadays commercial producers have found ingenious ways to create pearls of almost every hue under the sun.
Pearls were dewdrops from heaven that fell into the sea in Indian mythology and warriors in India encrusted their weapons in pearls to symbolise the tears and sorrow a sword can bring. In Europe pearls were widely used as medicine until the 17th century, as they were by the ancient Chinese who believed they brought wealth, power and longevity. Low grade pearls are still powdered for medicine in the Orient today.
Traditionally, pearls represent purity, which is why so many brides opt to wear them as jewellery or adorning their dresses on the big day. Pearls signify faith, charity and innocence.
Melody (Love Is In The Earth) says pearls provide a clean channel for spiritual guidance. She says, ‘The pearl has been known as a stone of sincerity, bringing truth to situations and loyalty to a cause.’ She says pearl has been used in the treatment of digestive disorders, to relieve nausea and bloating, to treat the soft organs of the body and to increase fertility and ease childbirth.
MOONSTONE
This stone gets its name from the Roman historian Pliny who said its appearance changed with the phases of the moon – something that people believed until the 16th century. Ancient Romans believed that the image of the moon goddess Diana was captured within the stone.
Moonstone belongs to the feldspar group of minerals which compose about half of the earth’s crust. When polished, the stone, which has a natural chatoyancy, sometimes displays a multi-rayed star or a ‘cat’s eye’ effect. It comes in a range of colours from creamy white, peach and brown to grey and almost green. The most prized stones come from Sri Lanka but moonstone is also found in India, Myanmar, Madagascar, Australia and the USA.
A sacred stone in India, it was said to have special significance for lovers who would see their future if they placed moonstone in their mouths when the moon was full. It is also a traditional wedding gift in India, believed to bring harmony to the marriage.
Naisha Ashian (Book Of Stones) says moonstone encourages us to pay attention to the cycles of our lives. With each cycle our wisdom, understanding and self knowledge are increased. A powerful stone for psychic awareness and intuition, moonstone can also help to sort out one’s emotions, release frustration and surrender to the natural progress of the cycles of life, she says.
Melody (Love Is In The Earth) says the energy of moonstone is balancing, introspective, reflective and lunar. A stone for hoping and wishing, it helps us understand the destiny we have chosen. ‘It is a stone for “feeling”, for understanding via intuition and emotional thoughts rather than through intellectual reasoning,’ she says. It can be used to alleviate emotional tension, enhance creativity, stimulate confidence and composure and help us in the fulfilment of our destiny.

ALEXANDRITE
This is one of the world’s rarest gemstones and was first discovered in the 1830s in an emerald mine in the Ural mountains, Russia, on the birthday of Czar Alexander 11 – hence the name. A variety of chrysoberyl, second only in hardness to diamond and corundum, alexandrite is famed for its colour-change characteristic. In artificial light it is light red or red-purple and in daylight and fluorescent light it is green or blue-green. Due to its rarity some jewellery is set with man-made (synthetic) alexandrite. Since its initial discovery in Russia it has also been found Sri Lanka, Burma, Madagascar, Brazil, South Africa and the USA.
Alexandrite is said to carry a joyful vibration and to be a powerful agent of inner transformation and spiritual evolvement.
Naisha Ashian (Book Of Stones) says, ‘Alexandrite is a stone of high wisdom and heart energy. It facilitates one in moving through grief or self pity. It is excellent for those who procrastinate and are unable to take action due to fear. Alexandrite is also a stone of joy, stimulating one’s recognition of abundance on all levels. It can be used to attract wealth and to assist in manifesting the heart’s desires and dreams.’
Melody (Love Is In The Earth) says, ‘This mineral can assist one in centering the self, reinforcing self-esteem and augmenting one’s ability to experience joy and to both acknowledge and appreciate the interconnectedness of all of nature.’