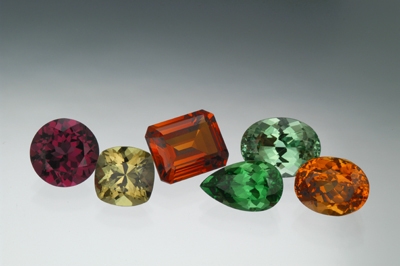 The first association of a special gem with each month was recorded in the Bible. Exodus 28 and 39 describe how, in 1250 BC, Moses made a breastplate for the High Priest of the Hebrews according to instructions he received during 40 days in the mountains. The breastplate featured twelve gems which were later linked with the signs of the zodiac and, later still, associated with the months in the year.
The breastplate is described as being square with four rows of precious stones. In the first row there was a ruby, a topaz and a beryl; in the second row a turquoise, a sapphire and an emerald; in the third row a jacinth, an agate and an amethyst; in the fourth row a chrysolite, an onyx and a jasper. Mounted in gold filigree settings, each of the twelve stones - one for each of the names of the sons of Israel - was engraved like a seal with the name of one of the twelve tribes.
JANUARY BIRTHSTONE
GARNET
This stone was named after the pomegranate, granatum in Latin, because it looks so like the fruit’s beautiful juicy red seeds. Even today most people immediately think red when they hear the word garnet. Actually those reds can vary from almost pink, through purplish red to orange or almost yellow and even green, black and colorless. This variation in colour comes from metals such as manganese, iron, calcium, and aluminium.
In fact there are five types of garnet – Rhodolite, Spessartine, Almandine, Grossular, Uvarovite and Andradite – and they don’t all have the same chemical composition or even crystal system (shape). Garnets are commonly found as small pebbles in streams, where the igneous and metamorphic rocks that contain them have weathered away. They’re found in many places around the world, including North and South America, Africa, Australia, India, Asia and Spain.
One of the stones said by some to have been used in the breastplate of the Biblical high priest, garnet has also been sacred to Native American tribes, South American tribes including the Aztecs and the Maya, and to African tribal elders. But while some garnets have been used for thousands of years others, like the Grossular garnet Tsavorite, were discovered relatively recently.
Garnets were used for adornment as far back as the Bronze Age in Czechoslovakia, 5,000 years ago in Egypt, around 2100 BC in Sumeria and between1000 and 2000 BC in Sweden. Ancient warriors believed that garnets brought victory while the Crusaders used them as protection against wounds and accidents during their journeys. In contrast, Asiatic warriors believed that glowing garnets, used as bullets, inflicted more severe wounds. During the Middle Ages in Europe people believed garnet enhanced truth, faith and constancy and dispelled melancholy. In Medieval times, it protected its wearer against poisons, wounds and bad dreams and also cured depression. Red garnets relieved fever, haemorrhages and inflammatory diseases. To modern users, the garnet symbolizes a light heart, loyalty and enduring affections.
Melody (Love Is In The Earth) refers to garnet as a ‘stone of health’ which extracts negative energy from the chakras. And she says: “It has also been known as a stone of commitment – to purpose, to others and to oneself.”