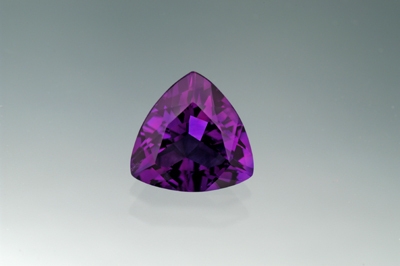 The crystal gets its name from the Greek word amethystos, meaning ‘not drunk’ because ancient Greeks and Romans believed it would ward off intoxication and keep its wearer clear headed and quick witted. It was highly prized by both cultures and soon became a stone, along with the colour purple in general, that was associated with royalty and the higher echelons of the Church. For centuries it has been used as a gem in crowns, sceptres and bishops’ rings. Amethyst is said to have been the ninth stone in the breastplate of the High Priest and one of the ten stones on which the names of the tribes of Israel were engraved.

Part of the quartz family, amethyst is found in many parts of the world but Brazil is probably most widely known for it. Some of the finest quality faceted stones on the market today come from Zambia. The colour, which ranges from pale lavender to deep dark purple, comes from the manganese, iron and aluminium traces contaminating the quartz. Amethyst is sensitive to temperature and the colour does fade if it is left in strong sunlight. When heated to 400 or 500 degrees centigrade the colour changes to a brownish-yellow or red and sometimes green. Most of the citrine, another quartz family member but much rarer, on the market is ‘cooked’ amethyst.
Melody describes amethyst as the stone of ‘spirituality and contentment’ and Robert Simmons associates it with spiritual protection and purification. He says it can be used to help us quit bad habits, like smoking, drinking or drug use.
I have always found amethyst to be helpful in combatting pain of any kind, whether physical, emotional or spiritual. It helps those who suffer terminal illness to find spiritual peace and let go and helps those who will be left behind to let them go. As Melody says, ”Amethyst bestows stability, strength, invigoration and peace; the peace being the perfect peace which was present prior to birth.” She, and many others, recommend amethyst for treating insomnia and clearing headaches and says an elixir of amethyst has produced excellent results in the treatment of arthritis.